Over 10 years we help companies reach their financial and branding goals. Engitech is a values-driven technology agency dedicated.

In cybersecurity, recognizing your own vulnerabilities is as important as keeping up to date with the latest security tools. It is vital to understand how threats enter a system and how attackers could exploit your weaknesses so that you can tailor a robust security solution to protect your assets and business data.

Penetration testing, also known as pen testing, applies the principle of offensive security before criminals gain access to your inner sanctum. Instead of waiting for an attacker to figure out a loophole, pen-testing services allow you to identify vulnerabilities and manage them proactively. The paradigm shift greatly improves your security posture online, ensuring your network security is more than sufficient to protect your organization’s sensitive data.

MSMNET Security employs the latest penetration testing methodology to examine every aspect of your IT infrastructure. Our professionals work systematically, exploring every avenue that mimics a real-world attack to see how effective your detection and response framework performs. We then use the information to improve your security controls and prevent future cyber attacks.

About Our Penetration Testing Services

Pen testing services are vital to preparing for secure operations, no matter your industry or area of interest. Our testing service aims to mimic a real-world environment as closely as possible, with our hackers using every tool in their arsenal to breach your organization’s defenses. As a leader in our field, we only work with security experts, so you can expect a rigorous testing protocol.

Every person in our penetration testing team is an ethical hacker, which means it’s their job to think like an attacker. The strategy uses every method possible to access sensitive data, from social manipulation to brute force that leaves no stone unturned. We will find any network vulnerabilities that could severely affect your organization’s brand image in the United States, the United Kingdom, or elsewhere.

Our penetration testing service isn’t only about probing for weaknesses; it’s also about finding the best way of addressing these limitations. Once the MSMNET Security team has conducted a vulnerability assessment, our next step is to help your organization adopt the right security posture for future operations.

We provide a detailed assessment of the vulnerabilities that includes a criticality rating for identifying which areas you should address first. Our penetration testers examine the effect of various vulnerabilities on business operations, the damage potential, and the statistical likelihood of these events in your field.

Our professionals also provide recommendations on how to bolster your security response with recommended solutions. You can access our penetration testing experts in real-time for questions or further information about how to protect your organization from attacks in the future. 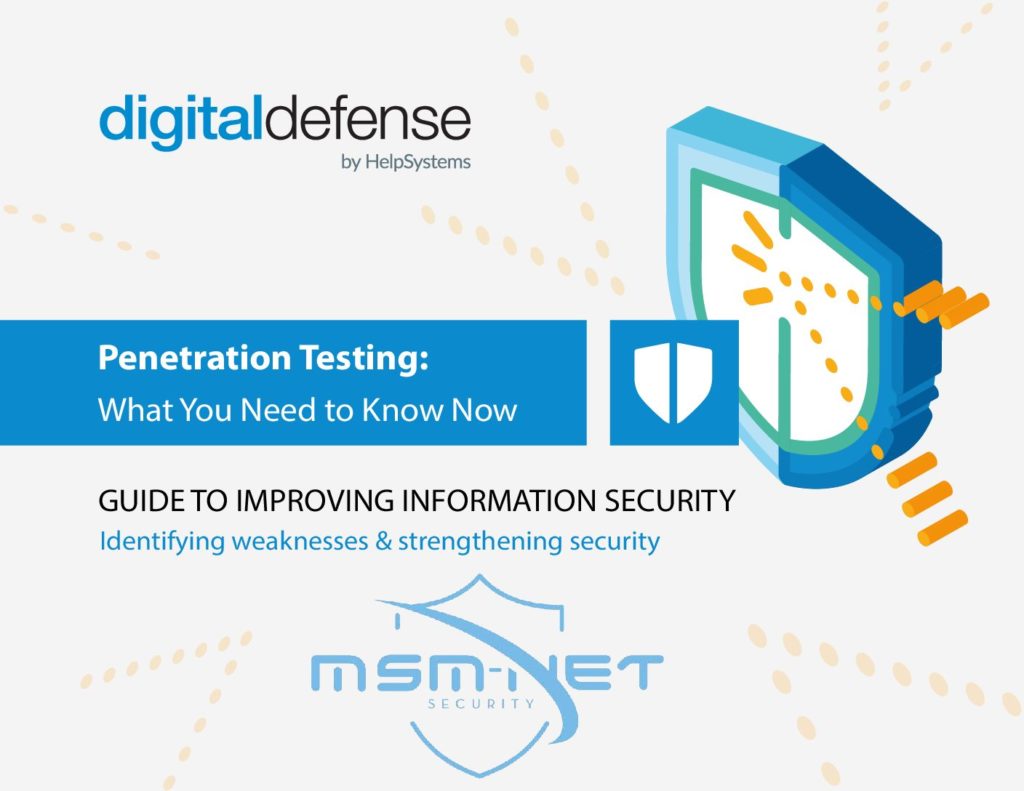 The technical team will remove any false positives and breach any exploits discovered to determine the fragility. They’ll also chain together multiple exploits in a worst-case scenario to reveal the consequences of an unchecked network vulnerability.

A simple vulnerability assessment will reveal weaknesses in your security posture. However, it won’t tell you the extent of the failure. Penetration testing services will provide a clearer picture of the flaws and unravel the consequences of ignoring these issues. Our comprehensive testing service will tell you which holes you need to worry about and areas that require less attention for minimal security impact.

The MSMNET Security penetration testing service is an effective and preemptive concept that covers all the bases. We’ll give you a choice between a full threat intelligence assessment or a smaller pen test that looks at a particular aspect of your organization or a particular threat source.

Penetration testing requires our team to use an impressive variety of protocols to assess the robustness of your threat detection and response. Most penetration testers focus on automated systems to detect vulnerabilities, but the process requires some finesse to mimic a human saboteur.

The foundation of our web application assessment methodology is the Open Source Security Testing Methodology Manual. We also use the Open Web Application Security Project as a framework for detecting threats and implementing the right security controls for your organization.

Organizations suffer many vulnerabilities inherent in business web applications. It leads to potential issues, many of which won’t appear in an automated penetration test. It’s why our professionals conduct extensive manual testing to find weaknesses in data validation and integrity checks, as well as problems with your authentication or session management systems.

Comprehensive security testing will also include internal network penetration testing services. It looks at threats from attackers that already have a foothold in your network, including disgruntled employees or external attackers with access to authentication data, like usernames and passwords.

An internal network penetration test discovers potential problems, but it also delves deeper. You will be able to see the consequences of a severe breach by identifying the exposed information. The methodologies we use include:

Most organizations will focus much on their wired network’s security posture but neglect to do the same for the wireless network. These wireless networks are significantly more vulnerable since it’s much easier to be in the physical vicinity to exploit it.

Wireless penetration testing will follow a similar security testing methodology as for the wired network. Typically, wireless networks are much easier to access since it’s incredibly difficult to prevent physical access against any wireless medium. It’s a feature that leaves many organizations open to incursion worldwide.

Our assessments include the evaluation of your wireless networks and protocols to identify vulnerabilities, typically through Bluetooth or RFID. It identifies the extent of the threat to your wireless network and provides suggestions for preventing unauthorized access via rogue access points or other weaknesses.

Security is about more than systems or networks; it’s also about people. One of the chief weak points in any security program is your workforce. Employees must undergo the same type of digital penetration testing assessments as the rest of your infrastructure.

By combining various on-site and off-site approaches, our penetration testing services detect any human weaknesses in your network security and propose an appropriate response. As with most other pen tests, it provides keen insight into potential cyber threats, consequences, and effective remedies.

Application Programming Interfaces (APIs) have changed the rules of engagement in the digital world, presenting a deeply alluring target for attackers. APIs continually transfer information across various networks and systems, especially in the mobile space.

The accessibility has catapulted APIs into one of the most widely used attack vectors, so it’s wise to include these platforms in your testing, thorough penetration assessments, and other security services.

The Open Web Application Security Project has included APIs in its 2019 framework. However, a traditional penetration testing methodology isn’t enough to address vulnerable APIs since automation can’t keep up with the sheer volume or variety on the market. You need a meticulous penetration testing service that will go through an API function by function, identifying all the ways an attacker would leverage these vulnerabilities to target your organization.

Many organizations have adopted mobile devices as part of their business function, without much thought to security testing or response. If you work on a “Bring Your Own Device” policy, you are at risk from mobile penetration into your network.

As part of our mobile applications testing and vulnerability management, we analyze Android and iOS for how mobile devices interact with your network. In addition to various network communications tests, we’ll also check how malware exploits your information security system.

Managing vulnerabilities is easier when you have the right framework. A key component is identifying how fast your detection and response to malware or mobile attacks could be in a real-time situation. We also look at how your employees’ mobile devices interact with various computer systems in your organization.

If your organization uses cloud computing, you’re probably working with Amazon Web Services or AWS. Security penetration testing with AWS is different from regular penetration testing and vulnerability management. The main distinction is that AWS is a software-as-a-service (SaaS) platform, which means that our clients don’t own the infrastructure. There are legal constraints to performing comprehensive threat intelligence on the service, which penetration testing services need to keep in mind.

AWS environments vary considerably, so any AWS pen tests must be specifically tailored to your organizational settings. It should also be well within your company’s scope and objectives. Don’t settle for AWS penetration testing companies that don’t have the platform’s required experience—those assessments won’t give you a comprehensive threat intelligence report.

Most penetration tests take the perspective of ‘no-knowledge,’ implying that the attacker doesn’t have any information about the target. It isn’t always the case, however.

There are many advantages to using the code-assisted approach, including allowing penetration testing services to verify business logic decisions. It also allows the visitor to peruse the connection between the back and front end of the application to test its vulnerabilities, streamlining your security response, and honing offensive security protocols.

In the services penetration testing world, there’s a myth that trudging through source code is tedious, but the truth is that this practice is necessary, and invaluable. Code-assisted testing offers plenty of extra value for minimal investment—it is well worth your time.

How often should I do a penetration test?

Security penetration testing is essential for any offensive security protocol annually. We recommend additional testing when:

What are the types of penetration testing?

The most common forms of penetration testing services include:

How long does a penetration test take?

A thorough application security assessment depends on many factors, including the organization’s size, the number of systems, and managed security services. Penetration testing will often take between one and three weeks.

Effective penetration tests are about more than probing managed security through proof of concept—it identifies strengths and weaknesses in your security response and shows how these vulnerabilities might impact your firm.

Regular penetration testing undergirds any offensive security protocol, and being proactive can save your organization the headache of future breaches. MSMNET Security uses several open-source tools to support your organization in taking the fight to the attackers.